Past Winners of our Honeymoon Giveaway 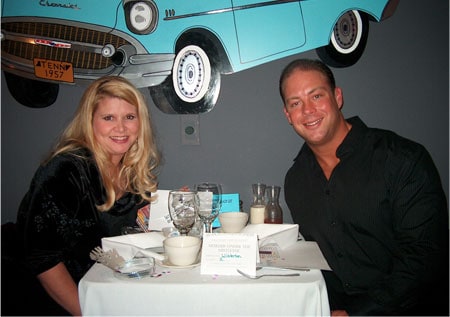 It is hard to imagine that we have been dating now for six years, and that is where it all starts. Mark and I met online at Match.com. I would never have been brave enough to take a chance on it, but two very close friends met their husbands the same way. I took another chance when I “winked” at him online instead of waiting and hoping he would wink at me. He responded with a request to meet for a drink, and 6 hrs later we were still talking. Lucky for me, he was the first (and only) person I met online, it was truly meant to be.

Fast forward a couple of years and we are on a wonderful romantic vacation at Sandals Antigu. It had rained EVERY day and my luggage had been lost by the airline so I wore Marks clothes for 4 days! He had decided that if my luggage (with my dressy dress) did not come, and the rain did not stop, he was just going to postpone proposing to me for another time. Fortunately, when we woke up on the last day there, the sun was shining and my suitcase was waiting for me in the lobby. I had no idea he was proposing so when we were on our way to dinner, we were led to a romantic candlelight table on the beach. Mark said he was looking for a sign that this was truly the perfect time to ask me and behind my head he saw a shooting star, which unbeknownst to me was his very first time ever seeing a shooting star. He took this as the approval he needed from his dad who had passed away when he was 14. Before I knew it, he was down on one knee in the sand with the most beautiful ring I had ever seen asking me to marry him and telling me he had already asked my dad for my hand in marriage (what a Gentleman). It was the most romantic proposal a woman could ever ask for. Of course, I said YES!

Our wedding date is 11/11/11. We are both incredibly excited to be going to paradise (Maui, HI!) Thank you theweddingvendor.com and askabouthoneymoons.com! We will be giving you an update once we get back from our trip.